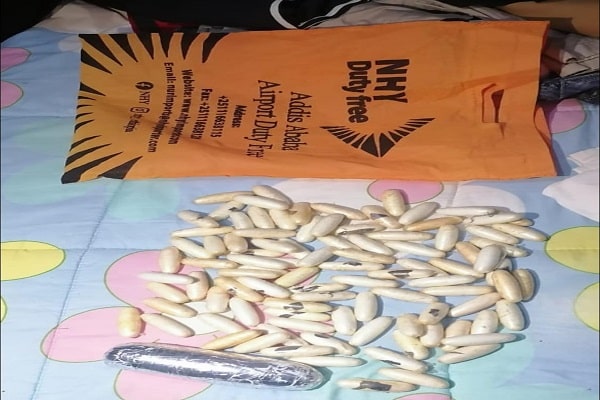 Five suspects were arrested and placed in custody, after being busted with narcotic substances during a swoop conducted by Nairobi detectives.

In a well-orchestrated sting operation, sleuths drawn from the Anti-narcotics Unit based at DCI Headquarters, nabbed the peddlers who had taken cover at an apartment within Nyayo Estate in Embakasi, Nairobi.

The five suspects who include two foreigners of South African origin and three Kenyans, are believed to be part of a larger group that has been operating a transnational drug trafficking syndicate.

After a detailed search in the apartment, several items were recovered including 240 pellets of unknown substances believed to be narcotic drugs, 5 mobile phones, a laptop and travel documents.

A motor vehicle make Toyota Mark x with a Burundian registration number was also impounded. All the exhibits have since been dispatched for forensic analysis at the Chemistry and Toxicological lab, based at the recently commissioned DCI National Forensic Laboratory

©Standard Gazette, 2021. Unauthorized use and/or duplication of this material without express and written permission from this site’s publisher is strictly prohibited. Excerpts and links may be used, provided that full and clear credit is given to Standard Gazette with appropriate and specific direction to the original content.
NairobiNarcotsSuspects