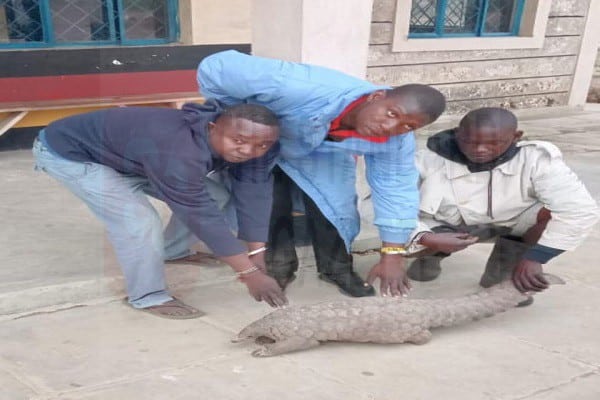 Detectives based at the Serious Crimes Unit have arrested three suspects in Kinango, Kwale county, coastal part of Kenya, after being found possessing a male Pangolin.

The detectives arrested the three Pas Mwiti, 30, Kabwere Tembe, 26, and Salim Nduria, 22, after a tip-off from public members.

Posing as well-oiled businessmen engaged in the illicit trade of the world's most endangered mammal, the sleuths lured the sellers from their hideout before pouncing on them and rescuing the animal, but not without a fight.

"Earlier, drama ensued in Vugurungani village after two of the suspects attempted to set the animal free and took flight.

"This prompted the detectives to chase after the scary mammal with a full armour of scales and the two men, leaving a thick cloud of dust. The detectives almost broke their limbs following the commotion that lasted less than 2 minutes," said the Directorate of Criminal Investigations.

However, they finally restrained the duo and the mammal and gave them a ride to Nairobi.

The endangered animal has since been handed over to the Kenya Wildlife Service personnel at the Nairobi Animal Orphanage.

Pangolins fetch a fortune in the black market since their scales are used for spiritual protection and financial rituals, making the nocturnal mammal that feeds on ants one of the most trafficked in the world.

©Standard Gazette, 2021. Unauthorized use and/or duplication of this material without express and written permission from this site’s publisher is strictly prohibited. Excerpts and links may be used, provided that full and clear credit is given to Standard Gazette with appropriate and specific direction to the original content.
detectivesKinangoPolice
0 22
Share