Police Officer In Court Over 13 Tones Of Sandalwood 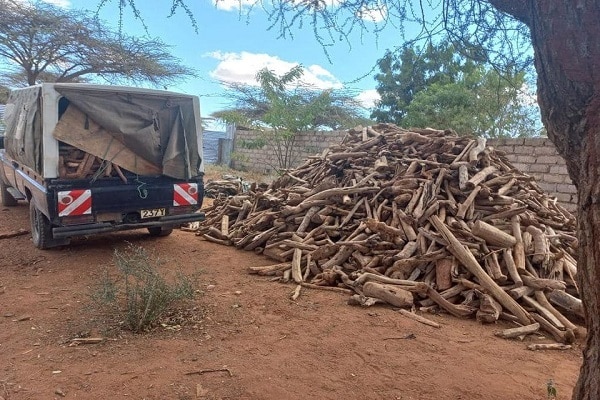 A senior police officer, on Wednesday, was arraigned at the Kahawa Law courts, Central Kenya, after he was arrested in possession of over 13 tones of sandalwood, 14 Kilograms of Cannabis Sativa, and an assault rifle.

Calvin Juma Boy Ombata, Superintendent of police deployed as the OCPD Samburu East, in Samburu county, was arrested after two police motor vehicles were found at his residence on September 27, 2022, loaded to the brim with the said consignment.

Earlier, detectives based at the Serious Crimes investigations unit had been tipped off regarding the illegal consignment and rushed to the senior cop's residence, where the discovery and subsequent arrest were made.

Mr. Juma Boy pleaded not guilty to the charge of being in possession of endangered species contrary to section 94(4) of the Wildlife Conservation and Management Act 2013. He was released on a bond of Sh2 million ($20000) and a surety of a similar amount.

The harvesting and trade of sandalwood was criminalized in 2007 by the government, following increased exploitation of the aromatic tree whose roots are used for the manufacture of medicines and cosmetics.

©Standard Gazette, 2021. Unauthorized use and/or duplication of this material without express and written permission from this site’s publisher is strictly prohibited. Excerpts and links may be used, provided that full and clear credit is given to Standard Gazette with appropriate and specific direction to the original content.
Calvin Juma Boy OmbataCannabis SativaPatrick MurigiPolice OfficerRifleSamburu
0 5
Share

Kenya Flags Off First Consignment Of Tea To Ghana