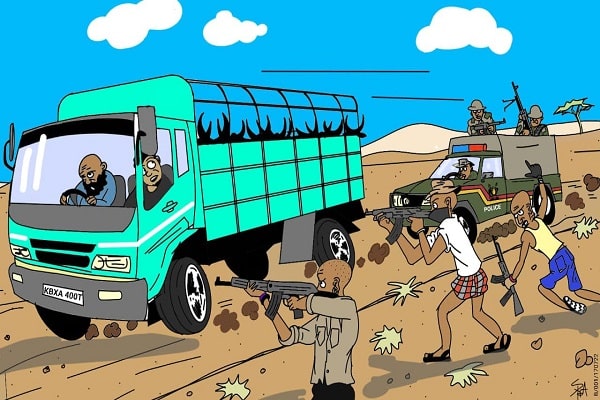 The raiders, who were about 50, ambushed a convoy of vehicles coming from Ndonyo Wasin market, targeting herds of cattle that were being ferried in lorries from the market.

Unknown to the raiders, a contingent of police officers based at Sere-Olipi police station was escorting the convoy closely behind.

Immediately the raiders opened fire to stop the convoy, forcing the officers led by Inspector Mwangale to jump from their Toyota land cruiser, take their positions, and respond to the provocation.

But the aggressive battle raiders, not known to give up in a duel for cattle, tilted their fire towards the police vehicle and fired back fiercely, missing the driver by inches.

This prompted the commander Inspector Mwangale to deploy the gunner on duty, who was in possession of a general purpose machine gun and sufficient ammunition.

"What followed was an avalanche of fire as the gunner unleashed the machine's ferocious firepower, clearing all the bushes used by the thugs for cover and exposing the over 50 bandits armed with AK-47 rifles," said the Directorate of Criminal Investigations.

Sensing defeat, the bandits took flight to different directions, with some leaving their firearms behind.

An unknown number of bandits were fatally wounded in the attack.

©Standard Gazette, 2021. Unauthorized use and/or duplication of this material without express and written permission from this site’s publisher is strictly prohibited. Excerpts and links may be used, provided that full and clear credit is given to Standard Gazette with appropriate and specific direction to the original content.
CattleNdonyo Wasin - Sereolipi RoadPolice officersRaidersSamburu

Osun Poll: Is this a litmus test for the 'Obidients'movement?