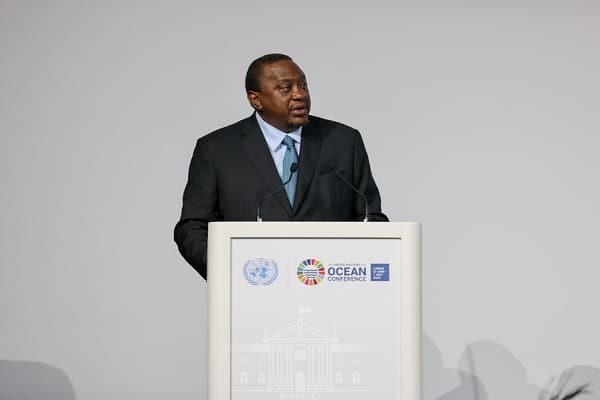 President Uhuru Kenyatta has called for urgent global action to address challenges facing oceans, seas and the marine environment, saying the world needed to upgrade from proposals on the subject to tangible interventions.

"We expect this conference to shift gear from proposals to action. Action that is driven by science, technology, and innovation. We expect to hear about sustainable examples of nature-based solutions. We expect to understand the linkages between the ocean, climate change and land-based actions, such as pollution," the President said.

The Kenyan leader said the time had come for world leaders to work together to scale up conservation action" driven by science and innovation" to help solve sustainability challenges and the health of global maritime resources.

"Our actions are not commensurate with the threat that faces the ocean. We urgently need to build an ocean-based economy where effective protection, sustainable production and equitable prosperity go hand-in-hand. These actions must be taken collectively because the ocean is a global common good," President Kenyatta said.

He pointed out that two-thirds of global waters lie in Areas Beyond National Jurisdiction (ABNJ) of Economic Exclusive Zones, noting that inaction in one sea affects other seas, adding that oceans were the most under-appreciated resource in the world despite their centrality to human existence.

"The ocean covers 70 per cent of the global surface, and 3 billion people depend on marine and coastal biodiversity. The ocean is home to up to 80 per cent of all life in the world; it supplies nearly half the oxygen we breathe, and around 90 per cent of the world's goods are traded across the ocean. The list goes on and on," the President said.

©Standard Gazette, 2021. Unauthorized use and/or duplication of this material without express and written permission from this site’s publisher is strictly prohibited. Excerpts and links may be used, provided that full and clear credit is given to Standard Gazette with appropriate and specific direction to the original content.
OceansResorcesSeasUhuru KenyattaUnited Nations Ocean Conference