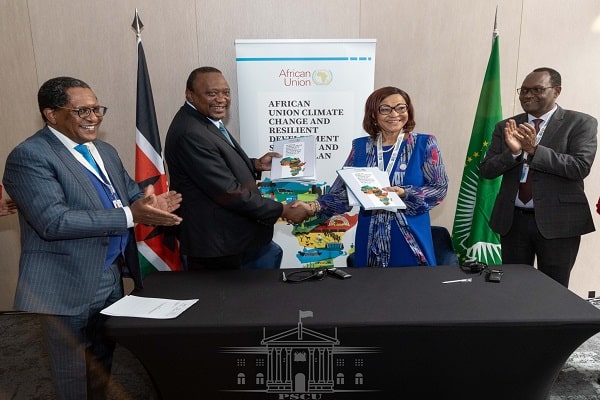 President Uhuru Kenyatta has called on African nations to develop and advance a common agenda as the continent prepares to host the 27th United Nations Climate Change Conference (COP27) in Egypt in November this year.

"Africa and its member states, under the umbrella of the Africa Union and African Ministerial Conference on the Environment (AMCEN), must synchronise its messages and speak with one voice in all inter-related global events. We must use our collective bargaining weight to its full advantage to influence the outcome of these multilateral processes," the President said.

President Kenyatta, who spoke during a meeting of the Committee of African Heads of State and Government on Climate Change (CAHOSCC) on the sidelines of the 2022 UN Ocean Conference in Lisbon, encouraged Africa to take advantage of its hosting of COP27 to push for equity and justice in climate financing.

"As agreed in Glasgow, ambition on all fronts remains critical to solving the climate crisis. Sharm El-Sheikh must build on and strengthen the commitments in the Glasgow Pact. But, ambition must also reflect equity, justice and the principle of Common But Differentiated Responsibility and Respective Capacity (CBDR-RC) and must leave no one behind," he said.

Once again, President Kenyatta regretted that despite Africa contributing less to global emissions, the continent suffers the most from climate-induced crises such as drought, floods and locust invasion while responsible countries "are not operating in emergency mode".

"The ongoing drought in the Horn of Africa, the cyclones in Mozambique and neighbouring southern African countries, the recent devastating floods in South Africa and a locust invasion in 2020 underscore the reality of the emergency," the President said.

Because of their high vulnerability, President Kenyatta urged African countries to prioritise climate change adaptation interventions saying the continent risks losing between two to four per cent of GDP annually by 2040.
"In this regard, we must continue pressing for recognition of special needs and circumstances of Africa as recognised in the convention.

He said the time had come for Africa to hold to account "big emitters" by resubmitting more ambitious Nationally Determined Contributions (NDCs) by 23rd September this year.

"The world is expecting us to build and maintain the momentum from Glasgow and to deliver concrete results in Sharm-El-Sheikh. We must therefore work together to deliver ambitious decisions," President Kenyatta said.

©Standard Gazette, 2021. Unauthorized use and/or duplication of this material without express and written permission from this site’s publisher is strictly prohibited. Excerpts and links may be used, provided that full and clear credit is given to Standard Gazette with appropriate and specific direction to the original content.
Facebook0
Twitter0
Whatsapp0
Google+
Pinterest0
Linkedin0
DiggDigg0
Tumblr0
Stumbleupon
VKontakte0
Reddit0
Delicious0
Weibo0
Xing0
Print0
E-mail0
Total
0
ClimateCOP27EgyptUhuru Kenyatta