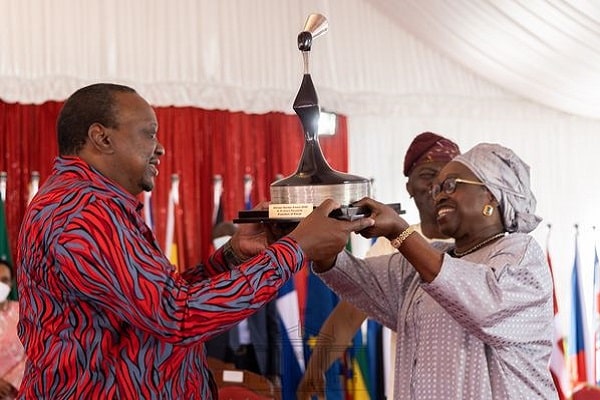 President Uhuru Kenyatta has received the African Gender Award 2022 for championing gender equality and development in the country.

The award serves as a mechanism to monitor and reward an African Head of State or Government who has demonstrated outstanding achievement in promoting gender equality and development within the thematic areas of the African Union's Solemn Declaration on Gender Equality.

The Solemn Declaration on Gender Equality in Africa was adopted by the Assembly of the Heads of State and Governments of the African Union (AU) in 2004.

Speaking at State House, Nairobi, when he received the award, President Kenyatta thanked the "Gender is my Agenda Campaign (GIMAC)" for recognising the Republic of Kenya's leadership towards translating the AU Solemn Declaration on Gender Equality into Action by making it a reality for the lives of women, men, girls and boys.

The award was presented to the President by Ms Benita Diop, the African Union Commission Special Envoy on Women, Peace and Security, representing the GIMAC selection committee.

"On behalf of the Republic of Kenya, and on my own behalf, I am deeply honoured to receive this year's African Gender Award (AGA) in recognition of the significant strides we have made in advancing gender equality and the empowerment of women and girls," President Kenyatta said.

Noting that the award is achieved through multi-sectoral support, the President congratulated the Kenya Private Sector Alliance (KEPSA) and the Centre for Rights Education and Awareness (CREAW) for winning the private sector and the civil society awards, respectively.

He commended the "Gender is my Agenda Campaign" for keeping the AU Solemn Declaration alive by monitoring its implementation to ensure credibility and reliability of the performance of countries on gender issues.

"In accepting this award, we recognize and appreciate the contribution of court agencies, non-state actors, including the private sector, that complement the Kenya Government's efforts by implementing gender-inclusive policies.

"In a special way, I want to particularly single out the women's movement in Kenya for the advocacy on implementation of the regional gender instruments including the Maputo Protocol," President Kenyatta said.

He expressed optimism that his administration's foundation for advancing gender equality, including the consolidation of strong partnerships and synergies, will be nurtured and strengthened for a more inclusive future.

©Standard Gazette, 2021. Unauthorized use and/or duplication of this material without express and written permission from this site’s publisher is strictly prohibited. Excerpts and links may be used, provided that full and clear credit is given to Standard Gazette with appropriate and specific direction to the original content.
Africa Gender AwardGIMACGovernmentHead of StateState HouseUhuru Kenyatta