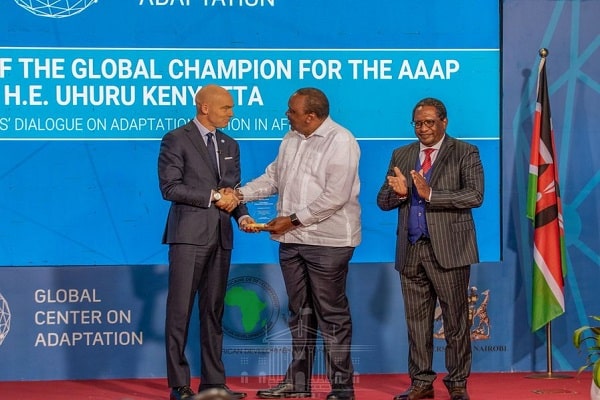 President Uhuru Kenyatta was inaugurated on Thursday, July 8, 2022, as the Global Champion for the Africa Adaptation Acceleration Program (AAAP).

AAAP is an African Development Bank (AfDB) initiative and Global Center on Adaptation (GCA) initiative, which aims to raise 25 billion US dollars for investment in Africa's climate adaptation initiatives.

At the event held at the University of Nairobi's Taifa Hall in Nairobi City County, the President was also feted by GCA for his leading role in advocacy and resource mobilization for climate change adaptation in Africa and globally.

The recognition was given to the Head of State by GCA CEO Patrick van Verkooijen who commended President Kenyatta for his sterling efforts in tackling the climate change challenge.

In his acceptance speech, President Kenyatta noted that most of Africa's socio-economic challenges are attributable to climate change and pledged his full commitment to advancing the continent's adaptation agenda.

"As an adaptation champion, I will be the voice of all voiceless Africans who are crying out for a climate-resilient and prosperous future," President Kenyatta said, adding that climate change had become an existential threat to every country in Africa.

The President noted that the Horn of Africa was facing its worst drought in over 40 years due to climate change.

"What does this mean in human terms for my fellow Kenyans and our neighbours in Ethiopia and Somalia? Harvests have failed, and 3 million cows are dead. People in drought-stricken areas face severe water shortages, and cases of the inter- community fighting over pasture are on the increase.

"As we speak, over four million Kenyans are in need of food assistance and close to one million children under 2 years are malnourished. Across the Horn of Africa, twenty million people – and six million of them are children - are severely food insecure," the President said.

"Such crises precipitate huge economic losses, estimated at 3% of GDP for the continent in the medium term. They also threaten peaceful coexistence, leading to inter-community conflict and displacement, as people relocate in search of food and pasture," the President said.

The Head of State said the situation is likely to negatively impact generations to come as children face malnutrition due to food insecurity, which undermines their health and productivity.

"This deadly toxic cocktail of Covid-19 pandemic, the Ukraine-Russian war and the climate change-related emergency grows more deadly by the day," he said

©Standard Gazette, 2021. Unauthorized use and/or duplication of this material without express and written permission from this site’s publisher is strictly prohibited. Excerpts and links may be used, provided that full and clear credit is given to Standard Gazette with appropriate and specific direction to the original content.
AAAPKenyattaNairobi