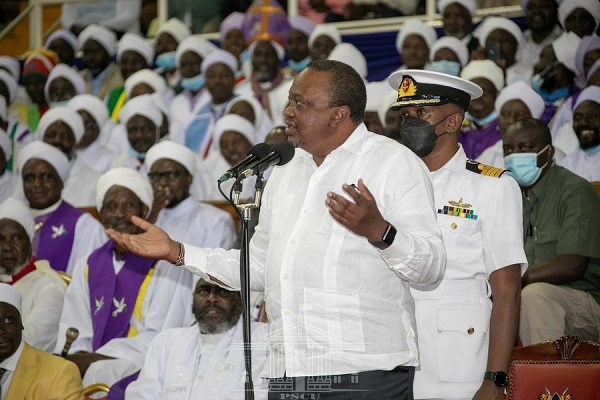 President Uhuru Kenyatta has asked school administrators to stop discriminating against students on the basis of their religious beliefs, saying the Constitution of Kenya 2010 guarantees freedom of worship.

Speaking on Sunday at the Moi International Sports Complex, Kasarani, during celebrations to mark 100 years of the Akurinu Church, the President urged school principals to respect the religious beliefs, norms and traditions of all students.

"If you look at all religions, they observe certain beliefs, norms and traditions. For instance, our Muslim brothers and sisters have particular attire which reflects their beliefs. The same applies to the Sikhs.

"I want to insist to the school principals that have been discriminating against our Akurinu brothers and sisters because of wearing their turbans at school that they should stop that habit. It is not justified. There is no law that says that a person doesn't have the right to identify themselves in school, at the hospital and in the office according to their religion.

President Kenyatta said students should be allowed to express their religious beliefs to build their confidence in God.

"Everyone has their rights guaranteed in our constitution, and they should be safeguarded. Everybody has a right, and we want to protect that right so that our children can grow as confident people who understand that their faith is their right," the President said.

He commended the Akurinu church for being at the forefront in spreading the gospel, noting that since its inception in 1922, the church has grown its membership to 1.5 million.

"We are here to thank God for guiding and bringing us to a place where we are celebrating 100 years of his work. Akurinu Church was started by one of us, a Kenyan who managed to spread the gospel, and now we have a membership of 1.5 million. It has not been an easy journey. It has been tough, but by God's grace, we have been enabled to be where we are now," he said.

The President further applauded the church's leadership for promoting education and spearheading various development activities that have been part and parcel of the country's socio-economic growth.

©Standard Gazette, 2021. Unauthorized use and/or duplication of this material without express and written permission from this site’s publisher is strictly prohibited. Excerpts and links may be used, provided that full and clear credit is given to Standard Gazette with appropriate and specific direction to the original content.
PresidentreligiousSchool administratorsStudentsUhuru Kenyatta

Illegal weapons recovered from a man's home in Marakwet East