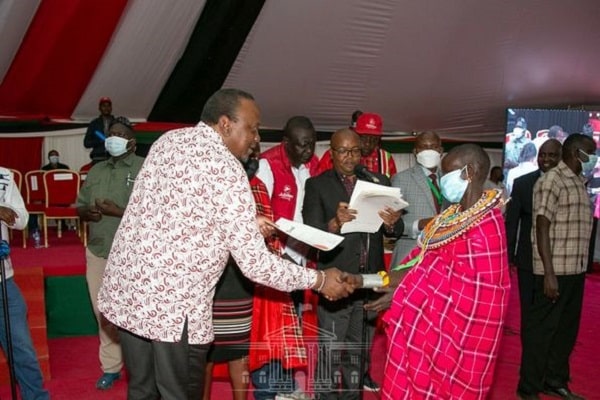 President Uhuru Kenyatta on Wednesday kicked off the mass issuance of title deeds to landowners in Samburu County, Kenya's Rift Valley, reaffirming Government's commitment to inclusive development across the country.

Noting that only 18 title deeds had been issued to Samburu County before his tenure, the President said the over 20,000 titles that will have been distributed by the end of his term will help unlock the immense economic potential of the vast county.

"All the administrations before mine had only issued 18 title deeds for the whole of Samburu County. But from 2018 to date, we will have issued 20,000 title deeds to the people of Samburu.

"This is development because you can use this document to get loans for investment and improve your lives," President Kenyatta told thousands of Samburu residents at Kenyatta Stadium in Maralal town, where he presided over the title deed issuance exercise.

The Head of State, who had earlier officially commissioned the new 65-kilometer Naibor (Posta)–Kisima–Maralal Road, commended Samburu leaders for their cooperation which he said had made it possible for the national Government to successfully implement critical projects in the county.

At the same time, the President announced that the national Government had set aside Kshs 1 billion this financial year for further improvement of the key road.

"This road is important because it will open up the county and attract more investors who will, in turn, put up factories and create employment for the youth," the President said.

President Kenyatta, who also launched Yamo Dam, which is set to provide clean water to over 64,000 residents of Maralal town and its environs, said the Government had allocated Kshs 1.3 billion for the project's water treatment plant and piping.

On the forthcoming elections, the President counseled to urge Samburu residents to vote for focused leaders capable of sustaining the country's current development momentum.

He emphasized that Kenya needs genuine leaders and selfless leaders capable of sacrificing their personal ambition and comfort for the country's sake.

"For the period I have been in leadership, I wouldn't have achieved much if you didn't give me good intentional leaders who were willing to work with me. Our success has been dependent on partnering with other good leaders.

©Standard Gazette, 2021. Unauthorized use and/or duplication of this material without express and written permission from this site’s publisher is strictly prohibited. Excerpts and links may be used, provided that full and clear credit is given to Standard Gazette with appropriate and specific direction to the original content.
Naibor (Posta) – Kisima – Maralal RoadSamburu CountyTitle deedsUhuru