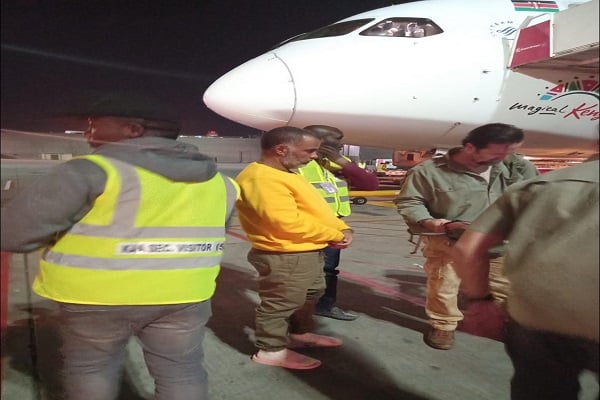 The suspect was extradited to the United States of America aboard a Kenya Airways flight destined to New York.

The extradition of the 46-year-old suspect follows his arrest by Kenya's Directorate of Criminal Investigations (DCI) detectives on May 31, after a cash reward of $1,000,000 was offered by the U.S government for information regarding his whereabouts.

According to a U.S. federal indictment, in or about August 2018 through about May 2019, Saleh and others identified during a wildlife trafficking investigation conspired to distribute at least 10 kilograms of heroin to a buyer in New York.

After several meetings, Saleh and his co-conspirators delivered the first kilogram of heroin to a buyer in Nairobi, Kenya.

According to the indictment, in June 2019, Saleh fled from law enforcement and his co-conspirators before completing the remaining heroin transaction.

He was subsequently arrested by DCI detectives for drug trafficking in Kenya on July 11, 2019, and arraigned at the Jomo Kenyatta International Airport Law Courts, a day after.

During Saleh's judicial process in the country, he was released on Sh200,000 ($2000) bail. However, he disappeared and became a fugitive, with a warrant for his arrest being issued.

©Standard Gazette, 2021. Unauthorized use and/or duplication of this material without express and written permission from this site’s publisher is strictly prohibited. Excerpts and links may be used, provided that full and clear credit is given to Standard Gazette with appropriate and specific direction to the original content.
Facebook0
Twitter0
Whatsapp0
Google+
Pinterest0
Linkedin0
DiggDigg0
Tumblr0
Stumbleupon
VKontakte0
Reddit0
Delicious0
Weibo0
Xing0
Print0
E-mail0
Total
0
Badru Abdul Aziz SalehedrugsSuspects

Another fugitive wanted in the U.S for drug trafficking arrested