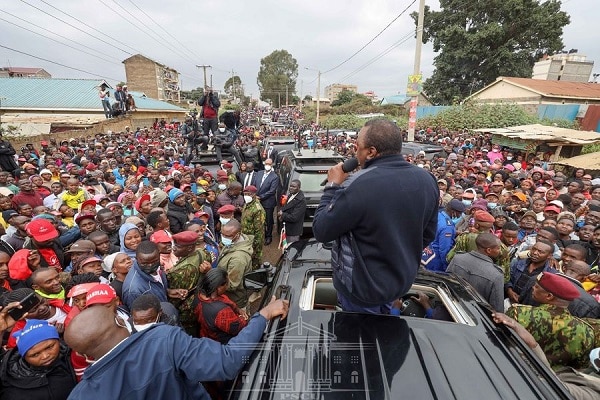 President Uhuru Kenyatta has advised Kenyans to critically assess those seeking leadership positions in the August polls to ensure Kenya gets peace-loving and progressive leaders to steer the nation to new heights of prosperity.

Speaking during a development tour of Nairobi's Eastlands, the President cautioned Kenyans against being cheated into electing selfish and power-hungry politicians and instead choose leaders who are committed to advancing the public good.

"Do not be lured by sweet-talking politicians who seek leadership for self-gain but have no commitment to the public good. Sometimes I am shocked by what some leaders say in public forums.

"When they see good roads, they stand and say, 'you can see what our Government has done, but when things are not good, they point at others saying the Government has failed.

"Now I wonder how many governments do we have?" the President said at Muhuri Muchiri Stadium in Ruai, where he led the issuance of 6,000 title deeds to several groups, among them members of the trouble Embakasi Ranching Company.

Other recipients of the title deeds are landowners in Dandora, Patanisho, Umoja 1, and Umoja 11, as well as several public institutions and commercial entities.
The President, who had earlier officially opened Mwiki and Mihang'o level three hospitals in Kasarani and Embakasi East constituencies, respectively, said the country needs leaders who provide solutions to challenges facing the society and not antagonistic rabble-rousers.

"That's why we are encouraging that we elect people who will come and continue with this work. It is not good to antagonize. No one's perfect, but when there are problems, a good leader will call others and sit down to discuss solutions," the President said.

He said his closing of political ranks with former Prime Minister Raila Odinga had created a peaceful and tranquil environment that enabled his administration to implement several key projects.

Once again, President Kenyatta thanked Mr. Odinga, a presidential candidate in this year's election, for his political magnanimity and urged Kenyans to elect him in the August polls.

"We have had peace because of shaking hands with Raila Odinga. I am happy with the way they are working with Martha Karua. These are the leaders who will be able to continue with the work in the right way.

"I took over from Mzee Kibaki, and I have done my part. I have not been able to sort out all the problems but let us work and ensure those who come will continue with this work," he said.

©Standard Gazette, 2021. Unauthorized use and/or duplication of this material without express and written permission from this site’s publisher is strictly prohibited. Excerpts and links may be used, provided that full and clear credit is given to Standard Gazette with appropriate and specific direction to the original content.
ElectKenyansUhuru Kenyatta

Presidential aspirant Jimmy Wanjigi locked out of the…

Raila Odinga to popularize his presidential bid in Nairobi