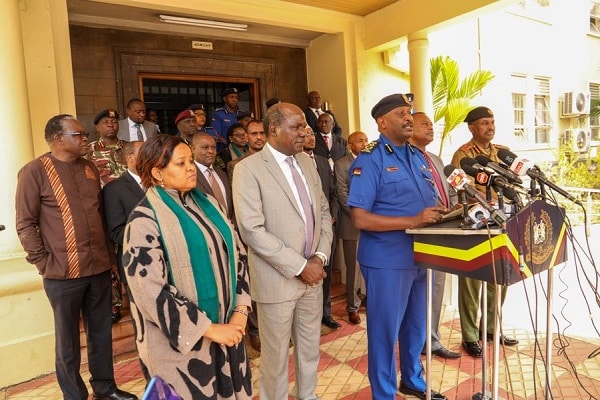 Chebukati said that the Commission will deploy over 150,000 police officers across the country to safeguard the General Elections, with each polling station having two police officers.

"The Commission is concerned that some politicians are buying identification cards from the public. I appeal to Kenyans not to sell their votes but come out in large numbers on August 9th to exercise their democratic right to elect leaders of their choice," said Chebukati.

Inspector General of Police Hillary Mutyambai said the National Police Service regularly meets with the IEBC to exchange, share and compare notes to make the exercise a success.

"This afternoon, we held a successful consultative meeting between NPS and IEBC where I briefed the chairman and commissioners, including senior staff of IEBC, on our security preparedness.

Mutyambai assured the public that the Police service remains committed to partnering and supporting IEBC to conduct and deliver a free, fair and credible 2022 General Election.

He added that the two agencies continue to collaborate and work together harmoniously to dispatch election materials from point to point as scheduled.

"With regard to investigation revolving around electoral stickers recently imported into the country, I wish to inform Kenyans that the matter has been resolved," said Mutyambai.

©Standard Gazette, 2021. Unauthorized use and/or duplication of this material without express and written permission from this site’s publisher is strictly prohibited. Excerpts and links may be used, provided that full and clear credit is given to Standard Gazette with appropriate and specific direction to the original content.
Share on Social Media
twitterfacebookwhatsapplinkedintelegram
Follow us on Social Media
twitterfacebookinstagramyoutubelinkedinwhatsappgoogle playtelegram
Hillary MutyambaiIEBCWafula Chebukati