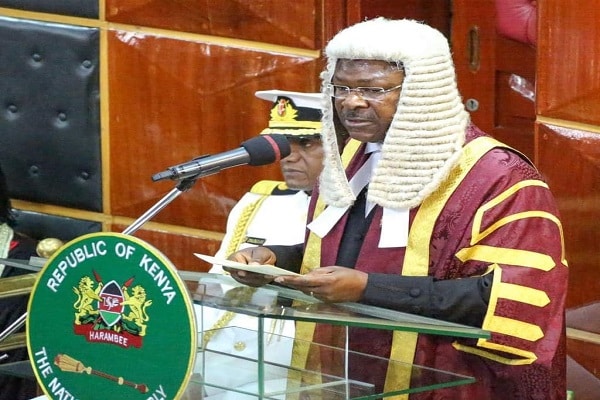 The Speaker of the National Assembly, Moses Wetang'ula, on Tuesday ruled that his deputy Gladys Shollei will run the business in the House.

This is due to the pending establishment of the House Business Committee.

In a communication to the House, the speaker said the move was necessitated by a question that has arısen relating to the constitution of the House Business Committee with respect to the House Leadership as contemplated under Standing Order 171 (1).

This question follows conflicting correspondences to the speaker from the Secretary-General of the Azimio La Umoja One Kenya Coalition Party, Majority Chief Whip of the Kenya Kwanza Coalition, and Jubilee Party Parliamentary Group, creating a puzzlement as to who are the bonafide Leaders of the Majority and Minority Parties are.

Wetang'ula thus sought the indulgence of the House to retreat and consider his ruling on that matter.

He further guided the House that during this period, the House will debate the Motion on the President's Address for the next few days before the question of the Leadership of the Majority and the Minority Party is determined.

"By the practice of our Parliament, Honourable Members, debate on the President's Address is accorded priority before any other business, save for procedural motions. It therefore naturally follows that the business to be transacted by the House for the next four days is debate on the President's Address.", read a part of the Speaker's Communication.

The speaker is expected to deliver his ruling on Thursday, October 6.

©Standard Gazette, 2021. Unauthorized use and/or duplication of this material without express and written permission from this site’s publisher is strictly prohibited. Excerpts and links may be used, provided that full and clear credit is given to Standard Gazette with appropriate and specific direction to the original content.
0 9
Share