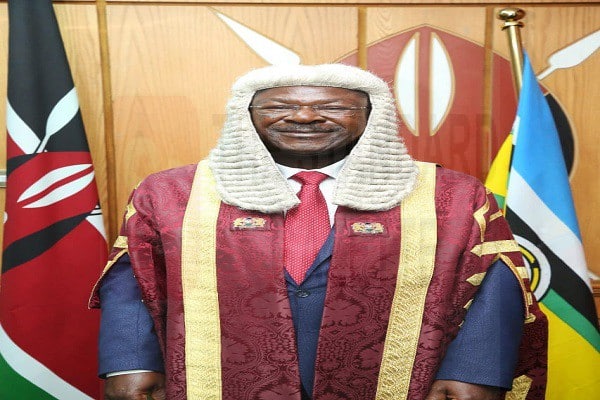 Wetang'ula, who was running for the position against the Speaker of the National Assembly in the 10th Parliament, Kenneth Marende, sailed through in the first round after Hon. Marende withdrew from the race just as the second round was about to commence.

The Senator had garnered 215 votes against Hon. Marende's 130, in the first round.

Wetang'ula brings to the National Assembly a great wealth of experience both as a legislator and a long-serving member of the Cabinet. He first joined Parliament as a Nominated MP in 1993. He was later elected Sirisia MP for three consecutive terms before he was elected the first Senator of Bungoma County in 2013.

He retained his Senate seat in 2017 and had just been elected for the same position in the just concluded general elections before he quit to run for election as Speaker.

In the race for the position of Deputy Speaker, Hon. Gladys Jepkosgei Boss Shollei beat Daadab legislator, Hon. Farah Maalim to clinched the seat after garnering 198 votes against 139 for Farah. Farah, however, withdrew from the race, saving the House the second round of voting.

"For both positions, a candidate requires two-thirds in the first round and a simple majority in the second round where only the two top contenders are eligible to run," said the acting clerk of the National Assembly, Ms. Sereh Kioko.

Hon. Shollei joined the August House in 2017 after she was elected as the County Woman Representative for Uasin Gishu county. She retained her seat in the recent polls.

Deputy Speaker Shollei becomes the second Woman Deputy Speaker in the history of the National Assembly after the late Dr. Hon. Joyce Laboso.

A seasoned lawyer and former chief registrar of the judiciary, she brings a varied experience in public service into the leadership of the National Assembly.

©Standard Gazette, 2021. Unauthorized use and/or duplication of this material without express and written permission from this site’s publisher is strictly prohibited. Excerpts and links may be used, provided that full and clear credit is given to Standard Gazette with appropriate and specific direction to the original content.
Gladys SholleiKenneth MarendeMoses Wetang'ulaNational AssemblySpeaker
0 24
Share