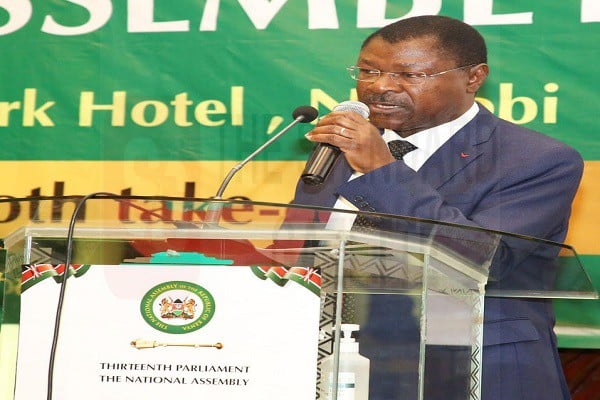 On Wednesday, members of the National Assembly took through the structure and the operations of the Parliamentary Service Commission as part of the ongoing Induction, which entered day three today.

In a session chaired by the Speaker of the National Assembly, Rt. Hon. Moses Wetang'ula, the top Parliamentary Management team, led by the Acting Clerk, Mrs. Serah Kioko, elaborated to the legislators the roles played by different directorates within the Parliamentary Service Commission.

Additionally, the Clerk highlighted key services that the Commission offers to lawmakers while assuring them that there is a dedicated and highly equipped workforce to serve them effectively.

On his part, the Director-General of Parliamentary Joint Services, Mr. Clement Nyandiere, apprised the Members on office facilities availed to them by the Parliamentary Commission, among them the recently constructed Bunge Towers.

The session was also addressed by the Executive Director, Center for Parliamentary Studies and Training (CPST), Prof. Nyokabi Kamau. She highlighted key training programs offered at the CPST and encouraged members to engage with the training institute to advance their careers.

The Centre, an autonomous Institution of the Parliamentary Service Commission, is mandated to train legislators at the National and County legislatures.

It has also been training legislators and staff from regional Parliaments and hosts the East African Parliamentary Institute (EAPI).